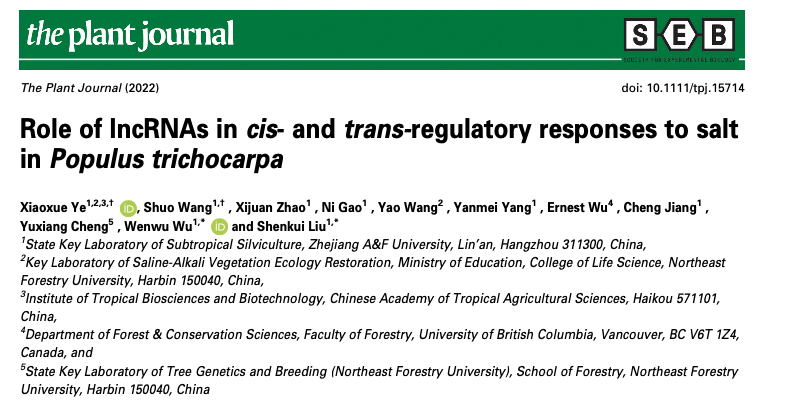 Long non-coding RNAs (lncRNAs) are emerging as versatile regulators in diverse biological processes. How- ever, little is known about their cis- and trans-regulatory contributions in gene expression under salt stress. Using 27 RNA-seq data sets from Populus trichocarpa leaves, stems and roots, we identified 2988 high- confidence lncRNAs, including 1183 salt-induced differentially expressed lncRNAs. Among them, 301 lncRNAs have potential for positively affecting their neighboring genes, predominantly in a cis-regulatory manner rather than by co-transcription. Additionally, a co-expression network identified six striking salt- associated modules with a total of 5639 genes, including 426 lncRNAs, and in these lncRNA sequences, the DNA/RNA binding motifs are enriched. This suggests that lncRNAs might contribute to distant gene expres- sion of the salt-associated modules in a trans-regulatory manner. Moreover, we found 30 lncRNAs that have potential to simultaneously cis- and trans-regulate salt-responsive homologous genes, and Ptlinc-NAC72, significantly induced under long-term salt stress, was selected for validating its regulation of the expression and functional roles of the homologs PtNAC72.A and PtNAC72.B (PtNAC72.A/B). The transient transforma- tion of Ptlinc-NAC72 and a dual-luciferase assay of Ptlinc-NAC72 and PtNAC72.A/B promoters confirmed that Ptlinc-NAC72 can directly upregulate PtNAC72.A/B expression, and a presence/absence assay was fur- ther conducted to show that the regulation is probably mediated by Ptlinc-NAC72 recognizing the tandem elements (GAAAAA) in the PtNAC72.A/B 50 untranslated region (50-UTR). Finally, the overexpression of Ptlinc-NAC72 produces a hypersensitive phenotype under salt stress. Altogether, our results shed light on the cis- and trans-regulation of gene expression by lncRNAs in Populus and provides an example of long- term salt-induced Ptlinc-NAC72 that could be used to mitigate growth costs by conferring plant resilience to salt stress.